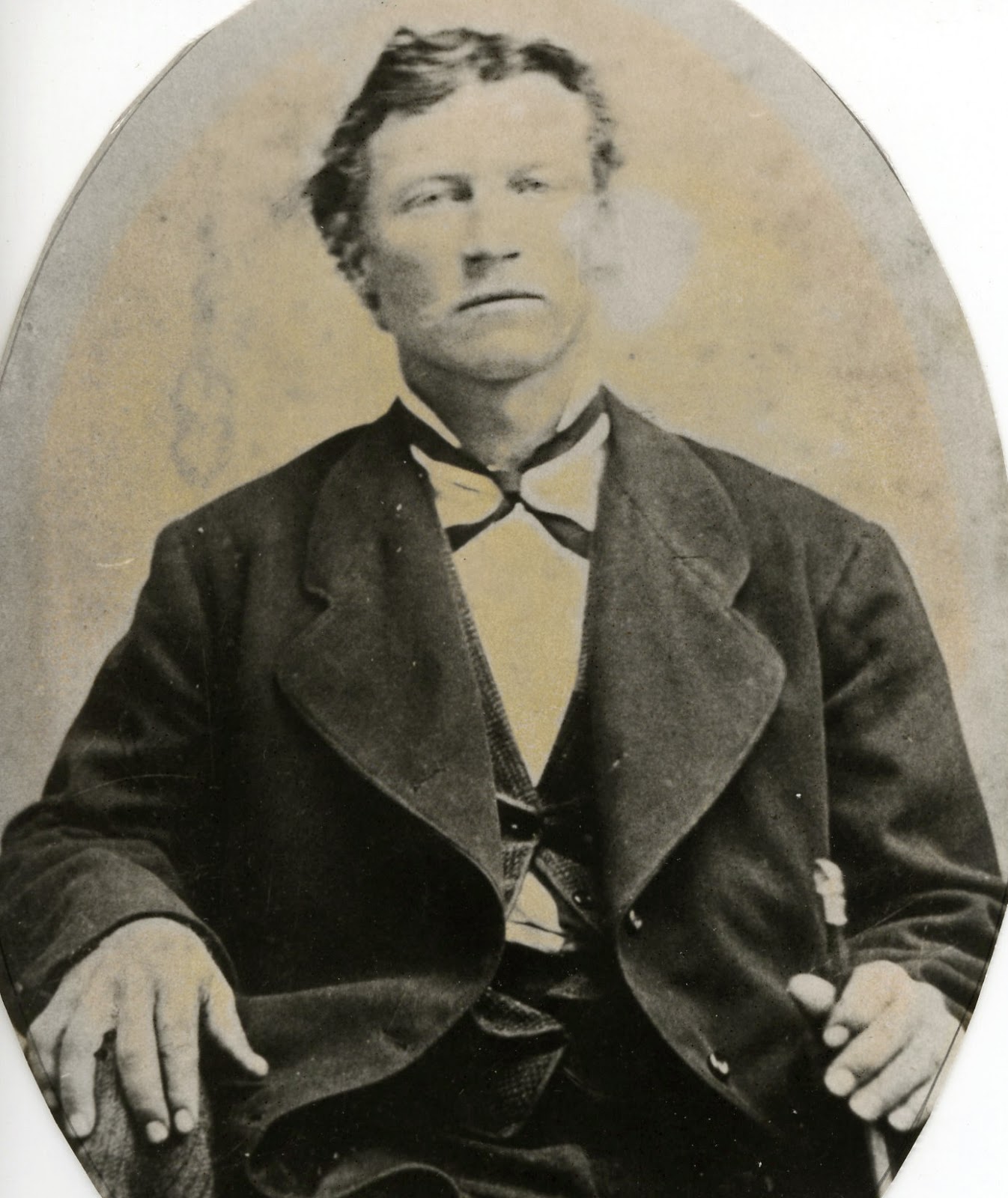 Today is the birthday of my second great grandfather, Albert G Britton, born on July 13, 1852 in Aberdeen, Brown County, Ohio, to Martin Watson Britton and Lucretia Ann Frame.  He was child number 4 of 12 children, and Martin and Lucretia's first born son.  His siblings were...

Martin Britton, Albert's father, was a farmer and sometime between 1860 and 1863 moved his family from Ohio to Pendleton County, Kentucky.  Albert followed in his father's footsteps and became a farmer also.  He and Eliza had 4 children together before Eliza's early death around the year 1880, making her about 25 years old.  Eliza is still a mystery to me.  I have been unable to find her death information or burial place.  Could it be that she died giving birth to her youngest child Lucia?

Left with 3 small children, I can only imagine that Albert was overwhelmed.  He was suddenly thrust into the life of a single father.  He had to make a living farming and care for his children by himself.  Maybe here we have a clue as to why Albert G took his oldest son, Albert Eugene, out of school to work sometime around his 3rd grade year. Eliza's sister, Lucy must have been helping out with the children, because it wasn't long after Eliza's death that on Oct 21st, 1881, Albert and Lucy Sharp were married. 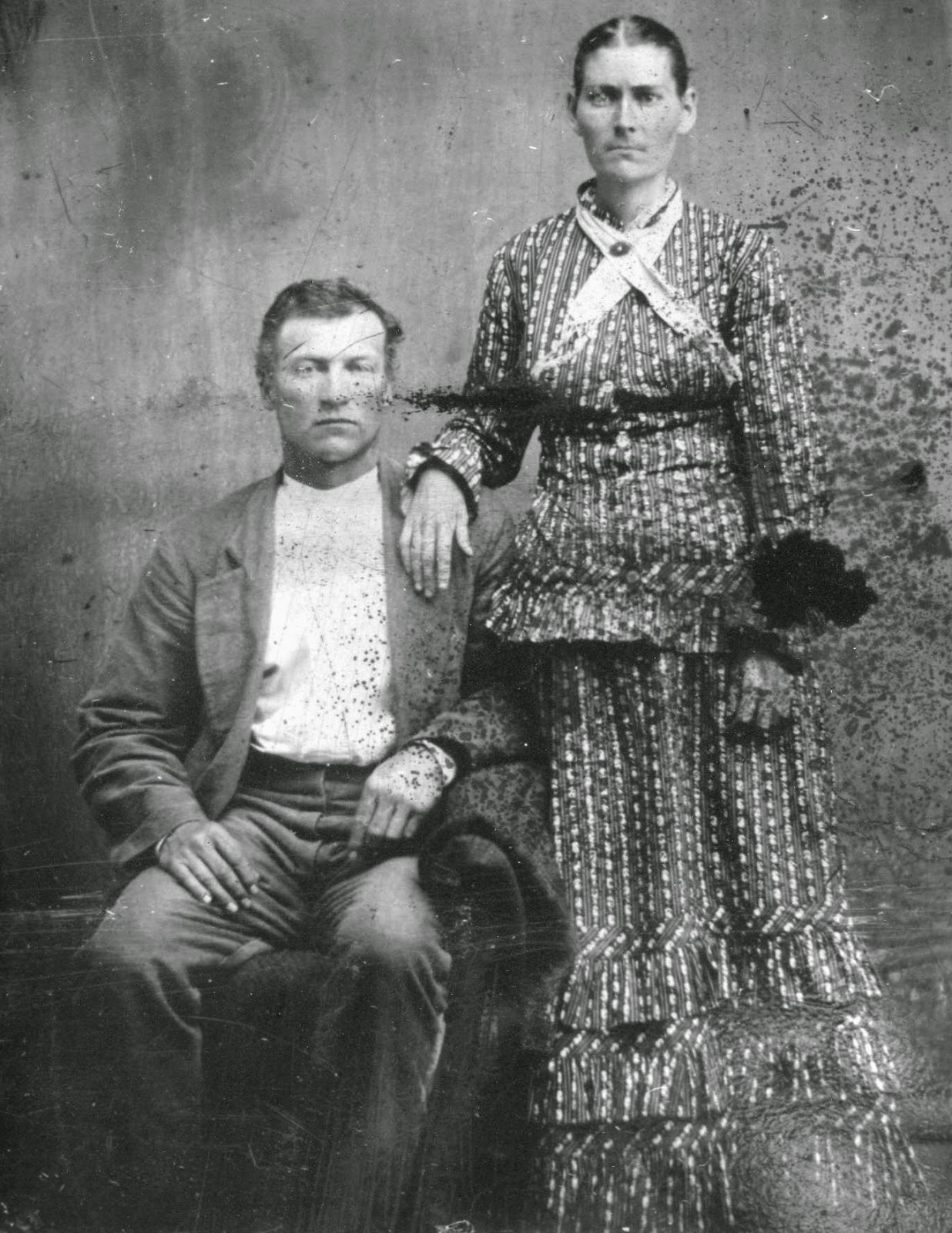 On March 21st, 1884, Albert G Britton died from an injury he sustained a few days before his death.  He was kicked in the head while helping his father break a young horse.  It seems his death wasn't caused by the head injury, but from an overdose of Calomel, aka Mercury.  Mercury was a popular remedy in the 1700's and 1800's.  It was thought to relieve the body of impurities and used for multiple types of ailments.  We now know that Calomel is toxic.  Albert was 31 years old when he died leaving behind 4 young boy's and a pregnant wife. The oldest boy was my great grandfather, Albert Eugene Britton. He had just turned 11 years old in February, one month before his father's death in March. Albert's youngest son, James, was born 2 and a half month's after the death of his father.

Below is a letter sent to me by Kenneth Britton, dated April 2, 1884, from Martin Watson Britton informing his son Reginald of his brother Albert's death... 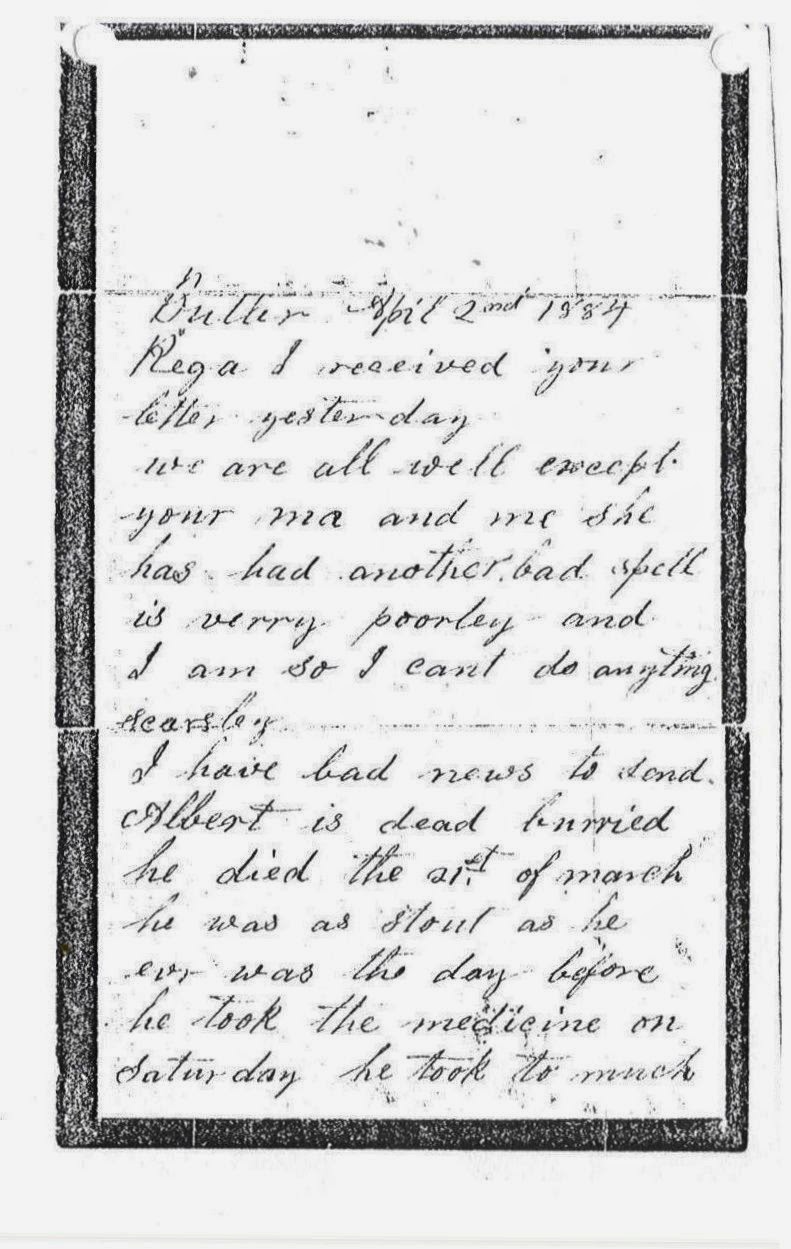 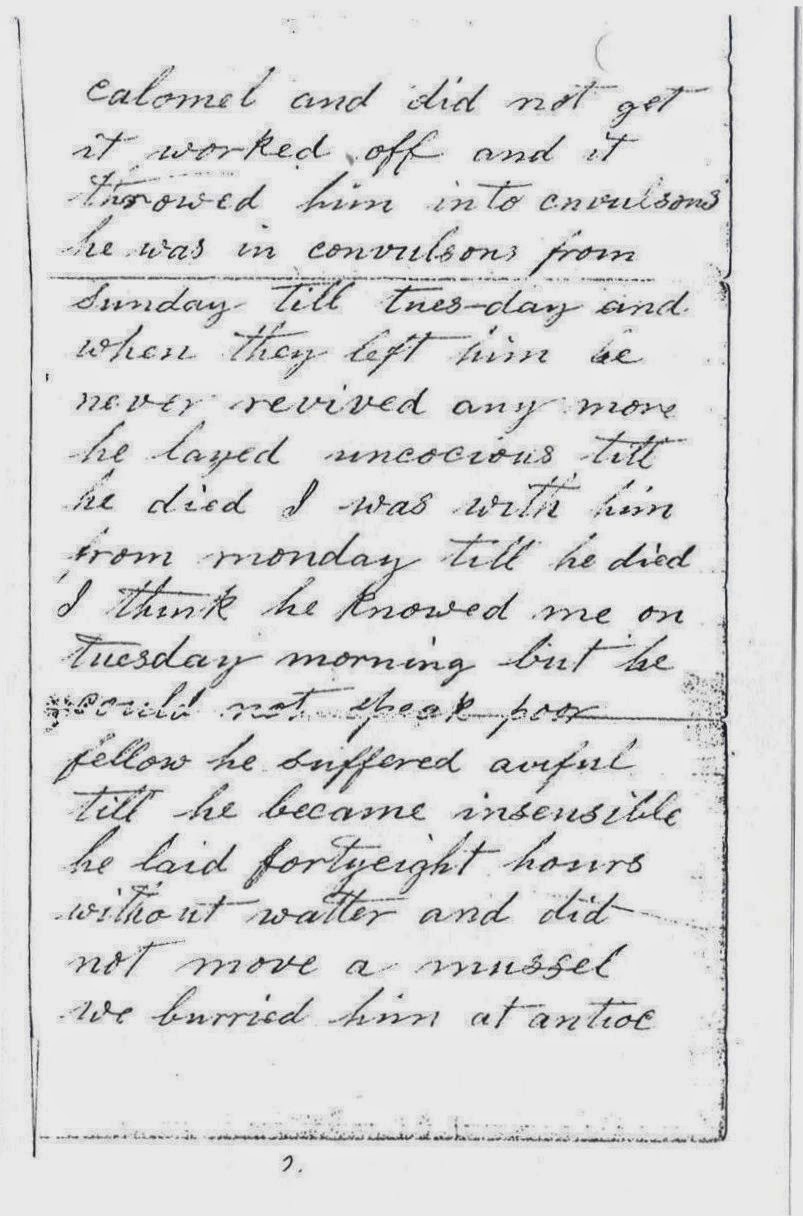 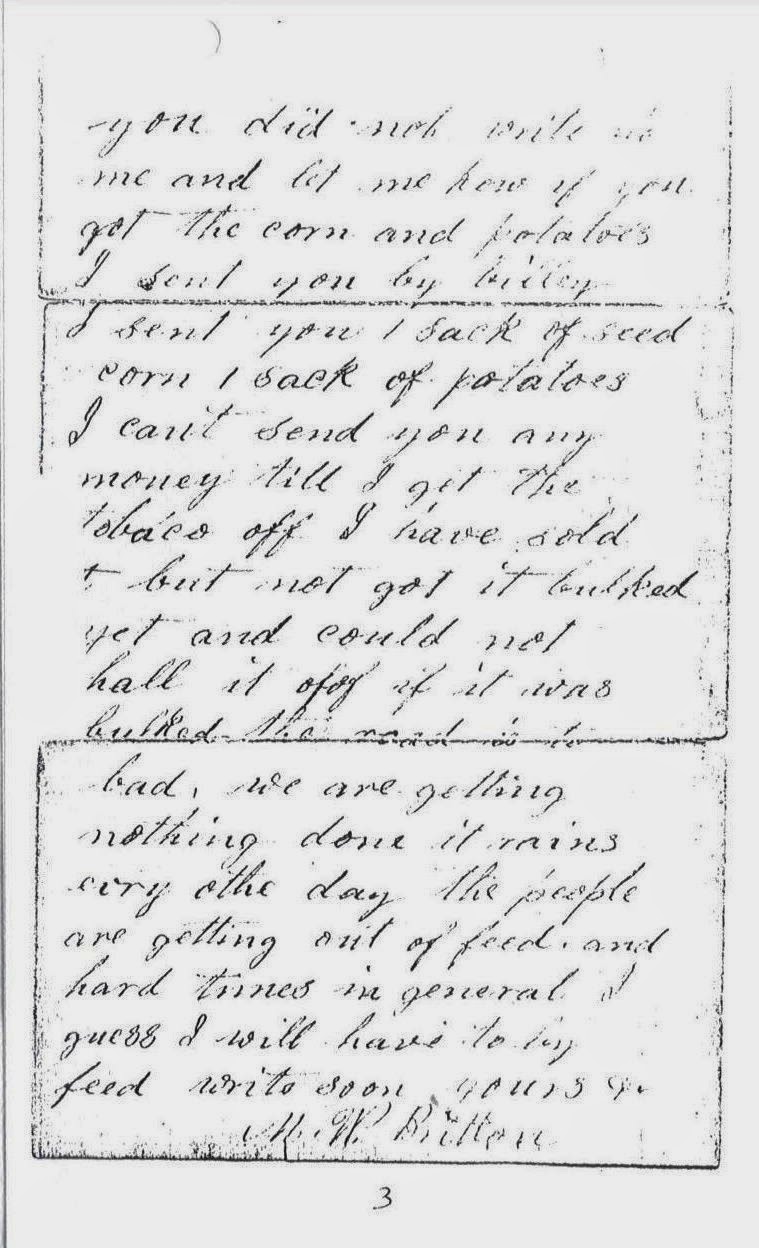 After reading this letter, you get a good idea of what a different day in age it was. I've tried to form a mental image of a father by his son's side for days watching him die in such a painful manner.  It seems incomprehensible.

It's also hard to imagine what Lucy was going through during this time. She was left with her sister's children as well as her own with a child almost due to be born. Three of these children had lost both their mother and their father and were now orphans.

These circumstances surely were the catalyst that lead to my great grandfather, Albert Eugene Britton, to run away from home with his brother Morris at a very young age (as told to me by my Aunt Janice Britton Peters). But that's different story for another time!

I'd like to thank Kenneth Britton for all of his hard work, research and generosity. He has paved a path for the descendents of Joseph M. Britton and made our sluething much easier!
Posted by Unknown at 12:14 AM No comments:

DNA has always interested me, but I didn't know that much about it. Most of what I read was related to Y Dna, which is passed down from father to son. After becoming obsessed with the PBS program "Finding Your Roots with Henry Louis Gates, Jr." and watching the "23andMe" commercials over and over again asking if I knew how much Neanderthal I was, I decided to take the plunge. I prepared myself in advance for what I might find out. Scott and I sent our our precious DNA (spit) through the mail. Then, the long wait began for our Autosomal DNA results. As the weeks went by, the more excited I became. I filled out our 23andMe family trees and answered oodles of health related surveys. Finally, the big day arrived! After six weeks of waiting, I found out that I am 100% European and 3.1 percent of my DNA is Neanderthal. Wow! I am in the 96th percentile among European users! 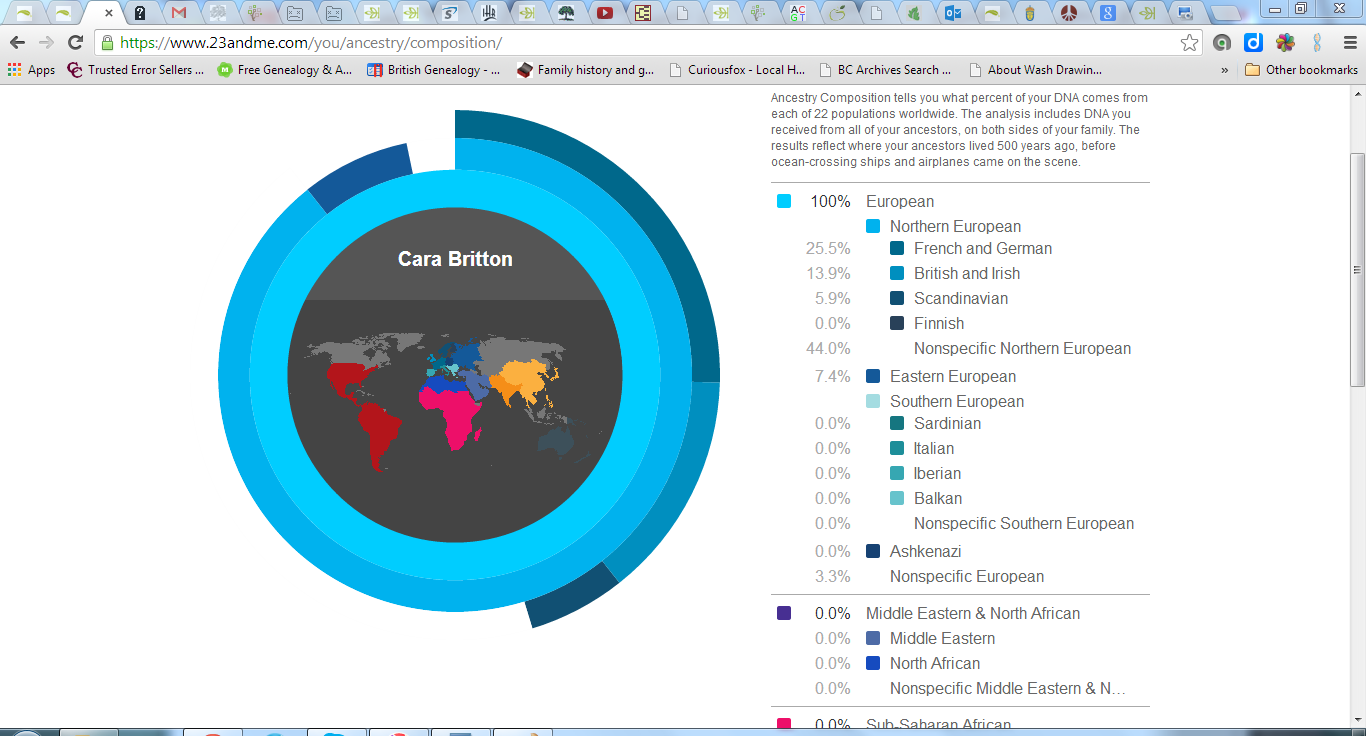 Scott and I both had nearly 1000 DNA cousins.  Some even as close as 2nd and 3rd degree.  Now came the part of figuring out how I was related to so many people.  Fun, fun, fun!

Email ThisBlogThis!Share to TwitterShare to FacebookShare to Pinterest
Posted by Unknown at 6:44 PM No comments:

I had never thought much, really, about who I am, where I came from and the people before me that helped mold me, my parents and my grandparents into the people we have become, and became, until a family mystery that Scott (my significant other) and I were told peaked our interest.

As I researched Scott's family, I was intrigued by what I was finding.  Scott and I cyber traveled to Minnesota, Canada and Leicestershire, England.  A 100 year old mystery was being solved and around every corner was another surprise.  We are now in contact with relatives from England, California and Minnesota that we had no idea existed, nor did we know Scott's great grandfather had 3 siblings that all had children, grand children and, of course great grand children, and so on.  This peaked my interest in finding out more about my own family.

So my journey began...

I knew my paternal grandparents were Danish, Welsh and Scot Irish.  My Gramma Britton told me stories about being related to Daniel Boone, Pennsylvania Dutch and Quakers on my Scot Irish grampa's side (I think there was a little bit of German thrown in there too).  Her mother's family came from Denmark and her father's family came from Wales.  That about sum's it up.  She also told me that my great Aunt Jean had done a lot of research and was a Daughter of the American Revolution.  The stories always sparked my interest and I loved hearing them again and again.

I only knew on my maternal side, that my mother is half German and half Swedish and grew up in Wisconsin. This has been a bit more difficult to trace.  Until DNA, that is...  I now am in contact with a German 5th cousin, who helped me connect my family to hers/ours.  Another cousin from Stockholm, Sweden is helping me with my Swedish side.

Follow me through Montana, North Dakota, Kentucky, Virginia, Pennsylvania, New York and on to England, Denmark, Wales, Ireland, Germany and many other countries.  Through murder, slavery, the Civil War, the American Revolution, a hanging, kings and queens and more.